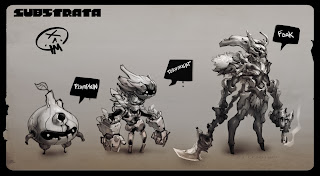 noodled away at this in the art jam tonight. Plumpkins run wild in the world. They have no interest in being planted. As they grow they become fascinated with the sun and sharp objects. Eventually their bark is infested with bugs that shape their bark into armor for Tornmight. As a Tornmight, the creature begins to experiment with magic. They eventually learn a spell that simulates sunlight. With this spell they grow out their bark like flesh into intricate shapes for their new armor. The most well crafted Foak become an inspiration and admired by the rest of the tribe. As the best magic wielders and crafters, the Foaks with the most beautiful armor become candidates for tribe chieftan. The wisest spellcrafters are able to learn how to create petrified pistols that use the bark eating bugs as ammo and the sun light spell to propel them. its like science and shit :p
Posted by Max Gon at 12:13 AM