So right before moving to California to venture into the videogame industry, I was freelancing in Richmond, Va with several different clients. I did T shirts for Jinx clothing, did some low poly models/textures for Sparkplug Games, and I worked as a general production artist for a marketing firm called Eastwood media. While working with Eastwood, I was tasked with a wide range of work including, t shirt designs, flash adverts for website, comic book pages for a modern spin on Little Red Riding Hood, background and characters for an Ipad game marketed towards kids, character designs for the local Baseball team's comic starring their Mascot Nutzy the squirrel, and wallpapers for ipad/iphones.

Here is my favorite piece that I did for them.
Its Santa and Nutzy kickin some Grinch ass... normally I would be rooting for the grinches. BAH HUMBUG. 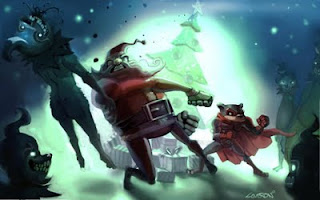 This is sweet! love all your work!